During the summer of 2016 I interned at Holy Family Academy.   I had the opportunity to create an app for our school. It was so interesting learning all of the computer science and coding behind app creation. The app is about the four Holy Family Academy mindsets: Resilient Learner,Servant Leader, Entrepreneur and Problem Solver.  Click here to check it out.  This is what it the first page looks like: 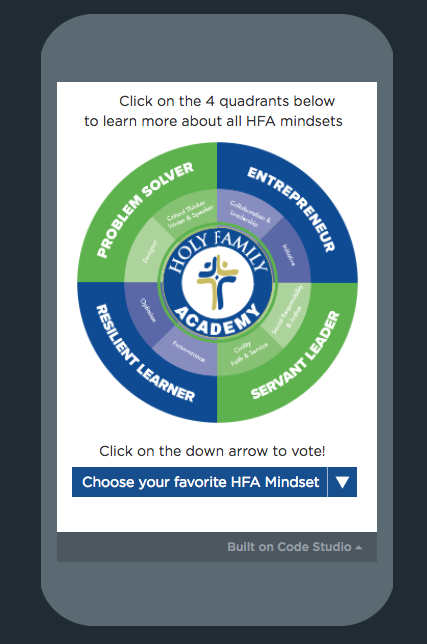 Before I  started  creating the app, I had to take self-paced classes on Khan Academy, Code Academy, and Code.org’s AppLab. I took these classes throughout the school year and in the summer. Once I had enough understanding I was ready to try an app on my own!  I was even ready to remix an App Lab app that records your vote: are you a dog-person versus a cat-person? 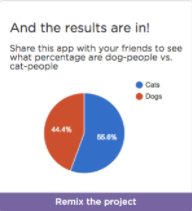 I decided to remix the voting app (photo below), but still create a poll that shows results based on the votes recorded. 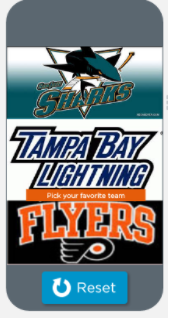 The only thing I could think of at the time was hockey teams, so that’s what I did. Now, I bumped into some problems and still didn’t understand some things that had to do with coding and computer science. Like anyone learning something new, know that you are not going to be amazing at something the first time, but the more you practice, the better you will become.

The good thing about this  website (Code.org) is that it has many tutorial videos. In case you have no knowledge of coding, but you still want to learn, check them out. I often would view a tutorial when I wanted to do something that I did not know well.  When I knew the basics, I created the hockey teams voting app.   I got very frustrated multiple times, but continued to learn and explore how to make a great app.  That’s how I  created my first app.

For each team you could tap their picture/ logo and then the results would show the percentage out of 100 in a pie chart for the team that was picked according to all the other votes.

Take a peek of the code behind my app:

After I created the hockey app and revised it with the help of Dr.Brandao, I started to create the HFA mindset app.I used the same formatting and idea when I started the mindsets app. Also, the computer science and coding I learned from this app were useful to complete the mindsets app. I first had an idea on how to  make the app but it was kind of out of date and didn’t really look the way we would have liked it to. So over a period of time in the summer,  I figured out a way to do it even though I would occasionally find bugs, be stumped,  get mad and wanna quit etc. As the time passed, it was getting better and better and easier to understand. We were running out of time so Dr.Brandao helped me finish the app. She taught me new things along the way. We finished the app during the summer before the end of my internship. YEA!

Then a week before we were supposed to attend the TRET-C at Montour High School, I accidentally deleted the whole app while I was talking to Ms.Flaherty. So the next week during EDGE I wasn’t able to attend TRET-C because I had to try and recreate the app. I tried to remake the app myself but it didn’t work out the way I intended.   I had to continue to work on it.  Dr. Brandao recreated the visual aspect of the app as well as some of the code again. She had me fix the broken code to fix the app.

Moral of the story and what I to learn the hard way: Always make copies of important documents because everyone makes mistakes. Special thanks to Dr.Brandao because I couldn’t have done the app without her.